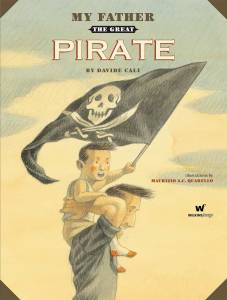 My Father the Great Pirate, Davide Cali and Maurizio Quarello’s stirring tale of a young boy’s search for the truth about his father, has been nominated for Germany’s most prestigious children’s book prize.

The book, which we published in English for the first time in late 2014, has been nominated in the children’s book category of the Deutscher Jugendliteraturpreis, the German Youth Literature Award.

The award is the equivalent of Australia’s Children’s Book of the Year Awards and is open to children’s books published in Germany. The creators do not have to be German, however.

As well as some euros, winners of the Deutscher Literaturepreis receive a ‘Momo’, a 30 cm-high bronze statue inspired by the eponymous character of Michael Ende’s celebrated 1973 novel.

My Father the Great Pirate is inspired by the lives of migrant mine workers and their families and is set against the background of one of Europe’s worst mining disasters.

The four category winners of the prize will be announced at this year’s Frankfurt Book Fair in October. We’ll be keeping our fingers crossed for Davide and Maurizio and their German publisher, Jacoby & Stuart. 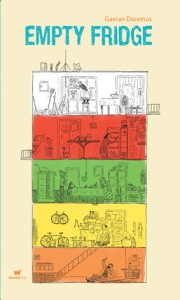 Gaetan Doremus’ Empty Fridge has been announced as an award winner at this week’s annual Bologna Children’s Book Fair.

The picture book with culinary flavour won the inaugural Books&Seeds Award. This award is devoted to books dealing with subjects such as agriculture, organic farming, biodiversity, food, hunger, abundance, nutrition, safety and cooking.

Here’s what the award jury, chaired by Italian writer Susanna Tamaro, said of the book:

This book is as high and tall as a building, like so many of the apartment blocks in the city. The book’s main character is a tenant who lives down in the cellar and finds a solution to solve the problem. He goes upstairs following a logical sequence and knocks on everyone’s doors, offering food together with a cooking project. Then a large round table and a huge cake in the oven suddenly colour the pages. Colour and conviviality stream out of the building flowing into other apartment blocks. Soon there is not enough space so people go out into the street and get lost in a community feasting in a street party. But was it all a dream? Or is the dream about to come true?

The book masterfully narrates the value of food in social exchange, a positive story flanking the trend to build communities and live in a community. Its analytical description of the characters and their domestic settings offers a strong and convincing example. Food is a need that brings everyone together and becomes a shared opportunity for us all, like the cake that helps to find creative solutions in the search for happiness.

Empty Fridge will be exhibited at the Biblioteca Salaborsa, in the heart of Bologna, during the Fair and then in Expo Milan 2015, as part of the Biodiversity Park.

Our congratulations must go to Seuil Jeunesse, which published the original French edition of Empty Fridge, entitled Frigo Vide.

Melbourne independent book publisher Wilkins Farago is one of three publishers nominated in the Oceania region for the highly prestigious 2015 Bologna Prize for the Best Children’s Publisher of the Year.

The annual award is run by the Bologna Children’s Book Fair—the world’s largest and most important children’s book fair—in association with the Italian Publishers Association. Now in its third year, the Bologna Prize recognises children’s books publishers who have ‘excelled in editorial innovation’ over the previous year. Six prizes are awarded, one for each geographical area: Asia, Africa, Central-South America, Europe, North America, and Oceania. 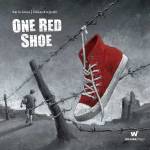 ‘We’re frankly gobsmacked to be nominated,’ said Wilkins Farago’s founder Andrew Wilkins. ‘We’re a tiny publishing house. How did they find us? We’d fit in the broom cupboards of our fellow nominees [Allen & Unwin and Text Publishing].’

Oyvind Torseter’s innovatative and surreal tale about a hole that suddenly appears in a man’s new apartment.

Wilkins Farago specialises in translating and publishing quality children’s books from foreign languages into English from its ‘office’ in South Melbourne.

‘Our publishing policy is pretty simple: unless we find books we absolutely love, we don’t publishing anything at all,’ said General Manager Anna Wilkins. ‘Last year, we were lucky to have some exceptional books, so this nomination is really for our authors, illustrators, translators, and international publishing partners.’

Key books published in 2014 included One Red Shoe (Karin Gruss & Tobias Krejtschi), a picture book set in the war-torn Gaza Strip, the surreal graphic novel The Hole and My Father the Great Pirate, Davide Cali and Maurizio Quarello’s moving story against the background of a historic mining disaster.

These are not mainstream kids books—there are no fluffy bunnies or pink fairies—but they respect children as readers, encouraging them to think and feel, which we believe the best children’s books should do,’ said Wilkins.

My Father the Great Pirate

Publishers are nominated for the award by international Publishers Associations and cultural institutions representing book publishers worldwide and by other publishers. The final winners are now being voted on by publishers attending the 2015 Bologna Children’s Book Fair, and will be announced at a special awards ceremony in Bologna, Italy on 30 March 2015.

Comic-loving Swiss-Italian Davide Cali is one of our favourite kids’ authors.

We like him so much, we’ve published 11 of his books, the most recent of which is the wonderful My Father the Great Pirate. 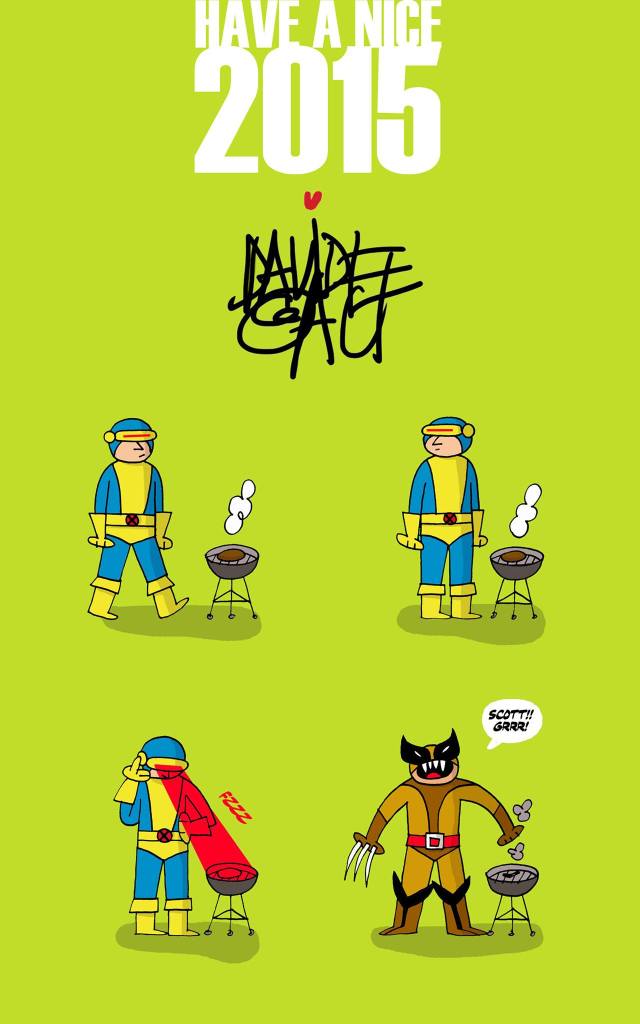 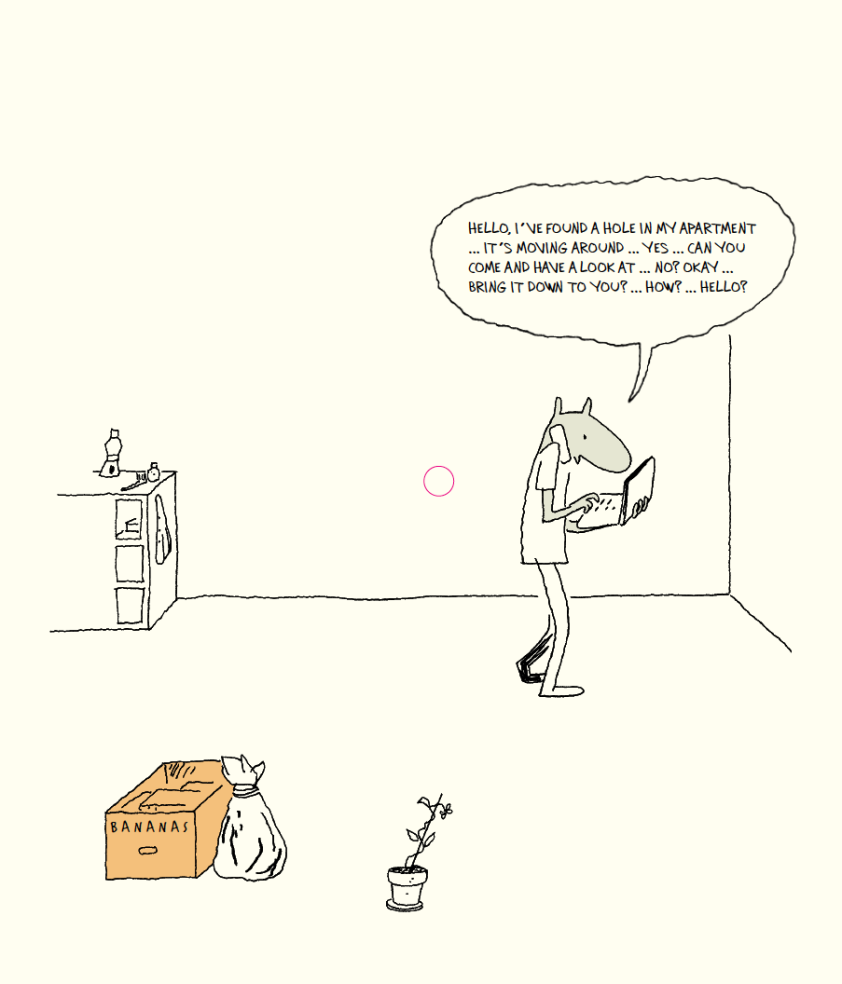 Illustration from ‘The Hole’

Reviewer Joy Lawn has elected Oyvind Torseter’s The Hole as one of her four children’s books of the year in the December issue of Australian Book Review.

In The Hole  by Oyvind Torseter (Wilkins Farago), recently translated from Norwegian into English, a man moves into an apartment and finds a hole. There is a literal hole on every page of this sophisticated picture book. The precise line drawings tell the fascinating story. 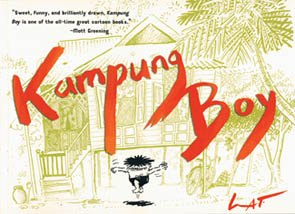 ‘Kampung Boy will put a smile on the face of everyone who reads it.’ The Age

Kampung Boy, Lat’s wonderful cartoon memoir about growing up in a Malaysian village, is featured in the latest edition of the New South Wales Department of Education English ebulletin for grades 7 to 12.

The ebulletin features great information on how this classic can be used in the classroom. Here’s a summary:

A brilliant autobiographical graphic novel, it is a fabulous book for Stage 4. It would work brilliantly for representing the self, narrative voice, representation and intercultural understanding.

Kids just love Kampung Boy. Our book trailer for it has now passed a monstrous 166,000 views on YouTube! 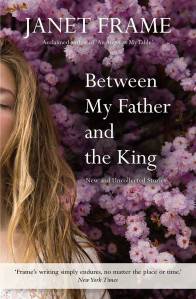 One hundred years ago this month, World War One—’the Great War’—began. Lest we forget.

Pamela Gordon, Janet Frame’s literary executor, has been reminded of this on her excellent blog, Slightly Framous.

When he returned from the war, her parents set up house with the assistance of a £25 ‘rehabilitation loan’ from His Majesty, the King (those being the days of the British Empire).

Like most of the stories in the collection, ‘Between My Father and the King’ was not published while Janet Frame was alive. Pamela Gordon explains why:

Almost one hundred years after the events of WW1, the story ‘Between My Father and the King’ was identified by the Manchester Review as ‘a controversial account of the Great War’, so it’s easy to see why Frame never submitted the story for publication during her lifetime.

The story, notes the Manchester Review, ‘resists the piety and national feelings stoked up by some more recent commemorations’.

You can judge the story for yourself here.

Better still,  why not buy the wonderful book it comes from? Between My Father and the King is available from good bookstores now, and online at Readings, Booktopia and many others. 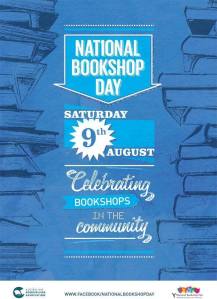 Today is National Bookshop Day in Australia. Bookshops around the country and putting on special activities and promotions to remind us all that they serve a vital role in our communities.

In a world where we are increasingly isolated from each other, a bookshop can serve as a social hub: a place where different ideas and ways of seeing the world are discovered and shared.

Bookshops have long been the major avenue through which our writers reach out to audiences.

And a bookshop is not only where you can find that next great book, but it’s a place to take children for guidance of what to read next, or even where to start reading.

For all their bells and whistles, there is plenty of research that shows book websites simply can’t replicate the discovery experience bookshops offer us, just as ebooks offer a pale imitation of the joys of owning a printed book.

In short, we can’t do without bookshops and they should be celebrated.

The best way—the only way—to celebrate them is to visit one. Today, on National Bookshop Day.

So, shut down your web browser, grab and friend and get down to your local bookshop—there’s still no better place to discover books.